The Countach was styled by Marcello Gandini of the Bertone design studio, the same designer and studio that designed the Miura. Gandini was then a young, inexperienced designer — not very experienced in the practical, ergonomic aspects of automobile design, but at the same time unhindered by them. Gandini again produced another striking design. The Countach shape was wide and low (1.07 metres or 42.1 inches), but not very long (only 4.1 metres or 163 inches). Its angular and wedge-shaped body was made almost entirely of flat, trapezoidal panels. 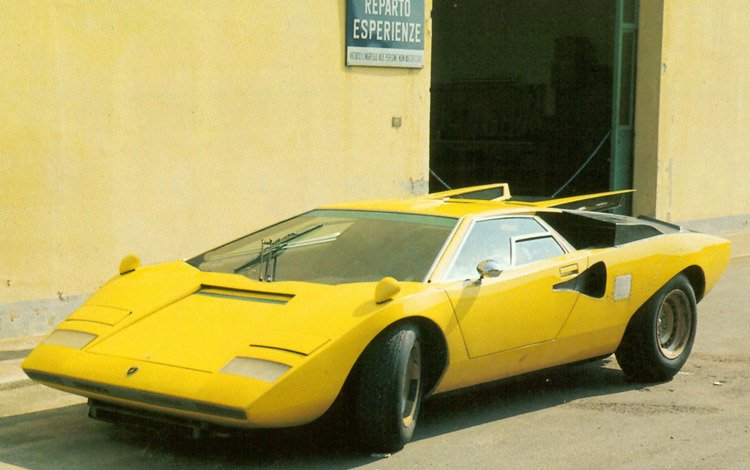 The doors, most often credited as a Lamborghini trademark, were a remarkable design feature for the Countach. They first appeared on the Alfa Romeo 33 ‘Carabo’ concept car in 1968, an earlier design accomplishment, also by the talented Gandini. The doors have come to be known as scissor doors: hinged at the front with horizontal hinges, so that they lifted up and tilted forwards. The main reason is the car’s tubular spaceframe chassis results in very high and wide door sills. It was also partly for style, and partly because the width of the car made conventional doors impossible to use in even slightly confined space. Care needed to be taken, though, in opening the doors with a low roof overhead. The car’s poor rear visibility and wide sills led to drivers adopting a method of reversing the car for parking by opening the door, sitting on the sill, and reversing while looking over the back of the car from outside.

The pure style of the prototype was progressively altered by the evolution of the car to improve its performance, handling, tractability, and ability to meet mandated requirements. This began with the first production model, which included several vents that Lamborghini found necessary to cool the engine adequately. These included the iconic NACA duct on the doors and rear fenders. The car design changes ended with a large engine vent directly behind the driver, reducing the rear view. Later additions—including fender flares, spoilers, carburetor covers, and bumpers—progressively changed the car’s aesthetic values.

The Countach’s styling and visual impression made it an icon of great design to almost everyone except automotive engineers. The superior performance characteristics of later Lamborghini models (such as the Diablo, or the Murciélago) appealed to performance car drivers and engineers, but they never had the originality or outrageousness that gave the Countach its distinction. The different impressions left by the various Lamborghini models have generated numerous debates and disagreements over what constitutes “classic” or “great” automotive design (elegant looks and style, versus technical and engineering superiority). Despite the impracticality and (required/needed) updating over time, one should note that the basic iconic shape of the first Countach prototype revealed in 1971 remained virtually unchanged over an exceptionally long 19-year lifespan.